A few weeks ago, I made a brief visit to Copenhagen to participate in a one-day conference about cities, films, digital scholarship and film archives. The conference was organized by the European project I-Media-Cities and hosted by the Danish Film Institute’s Cinematheque. The program can be accessed here. It was a great day with several inspiring discussions. 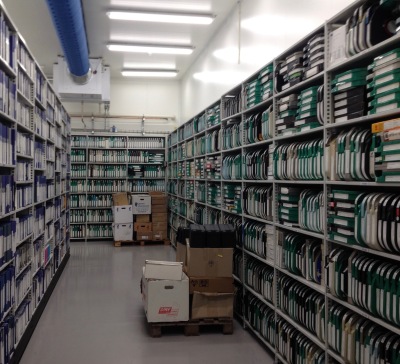 Cans and boxes at the DFI Film Archive.

The day after the conference I got to visit the DFI Film Archive in Glostrup to watch a few films preserved in the collection – Peter Kubelka films in particular – and got a tour. The visit had been kindly prepared by film archivist and historian at DFI Katrine Madsbjerg, with help from curator Thomas Christensen in the preparation of prints. Below I share a few impressions and pictures from the visit.

I had known for more than ten years, that there were prints of filmmaker, preservationist and co-founder of the Austrian Filmmuseum Peter Kubelka’s films in DFI’s archive. For some reason I have forgotten where exactly I became aware of that fact (I am still searching in old notes to find out), but I remember becoming eager to see Kubelka’s films after familiarizing myself with and reading about Peter Tscherkassky and the Austrian avant-garde around 2007, and subsequently trying to find out where I could get to see the titles discussed. Yet, back then I never found a good occasion to seek out the Kubelka prints at the DFI, ended up moving abroad and finally got the chance to attend Kubelka screenings elsewhere (and was deeply fascinated by what I saw). However, my curiosity for the prints in DFI’s archive and their history remained intact. For this reason, I was thrilled when I was told I could request titles from the collection to watch during my visit at the DFI and, as a no-brainer, immediately asked for the prints of Kubelka’s films.

To understand why (some of) these prints are preserved at DFI, it is important to mention that there is a Danish-Austrian connection. I learned this in February 2012 when I took part in a film and food workshop with Kubelka in Amsterdam, organized by the Sonic Acts festival. On this occassion I had the possibility to briefly converse with Kubelka after his lecture (and get my copy of Christian Lebrat’s monograph on his work – Peter Kubelka (Paris Expérimental Editions, 1990) – signed), who affectionately told me about his friendship with Danish filmmaker Jørgen Roos (1922-1998). From then on, my assumption was that Kubelka’s connection with Roos was why and how some of his films had entered DFI’s film archive. In part this indeed turned out to be a correct assumption. For instance, while the DFI bought a print of Adebar (Austria, 1957) already in 1959, their print of Arnulf Rainer (Austria, 1960) was Jørgen Roos’ personal print and was acquired in 1997 the year before Roos’ death. Here are the Kubelka titles that the DFI has in its collection:

Getting the opportunity to watch the DFI’s Kubelka prints during my visit to the DFI archive filled a gap in my cinephile curiosity for Kubelka’s work and its preservation, while giving me the chance to watch some personal film favorites again. I had only seen Mosaik im Vertrauen once before – as part of a program curated by filmmaker Milena Gierke, one of Kubelka’s former students – at the old Filmmuseum in the Vondelpark in Amsterdam in November 2010. I was surprised to see (again) how great a film Mosaik is. While the grey Danish November sky was brooding outside, there were pure fireworks to be marvelled at in the viewing room in Glostrup! Below, I share a few photos I made of Mosaik im Vertrauen. 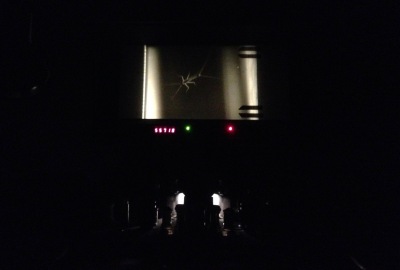 The work of Carl Theodor Dreyer occupies one of the most central places in Danish film history and in the DFI’s preservation work. Last year, the DFI obtained the copyrights to the films of Dreyer produced by the company Palladium, when Palladium decided to donate their collection to the DFI. In addition to this, DFI has many film related materials which document the life and work of Dreyer. I also got the chance to see a few of these during my visit.

Perhaps the most incredible thing to see was Dreyer’s personal editing table, which is pictured on the two photos here below. I could not gather in which period exactly he made use of this table, but it is an editing table for sound films. 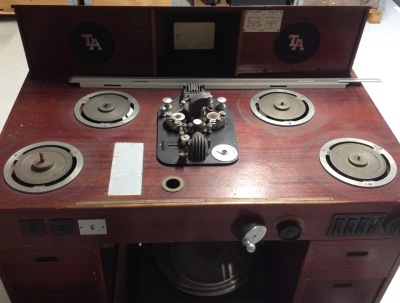 Another set of interesting items preserved at the DFI are set designs for La Passion de Jeanne d’Arc (1928). As conservator Katja Rie Glud explained to me there is a great degree of uncertainty in establishing the creation date of these objects. The objects’ materially heteoregeneous composition suggest they are original set designs which have later been repaired and modified – sometimes haphazardly and heavy-handedly – in order to exhibit them. There still remains some research to be done before that can be established.

At this moment, the designs are kept in French security boxes made for an exhibition at the Pompidou Centre in Paris in the 1990s. I post a few photos below. The DFI has also made a beautiful photo gallery with professional photos of the items that can be viewed here. Moreover, the designs can be seen in a short film from 1965 here, shot at the Danish Filmmuseum on the occasion of Dreyer being handed over a plate of honour for the selection of La Passion as one of the twelve best films ever made during the Expo 58 in Brussels seven years earlier. The plate is handed over by Ib Monty, then Director of the Danish Filmmuseum. (Thanks to Lisbeth Richter Larsen and Maria Knude Oldhøj Nielsen for pointing me to these resources!).

All in all, I could hardly imagine a better way to spend a grey November Friday morning. Infinite thanks again to Katrine Madsbjerg for setting up the visit!